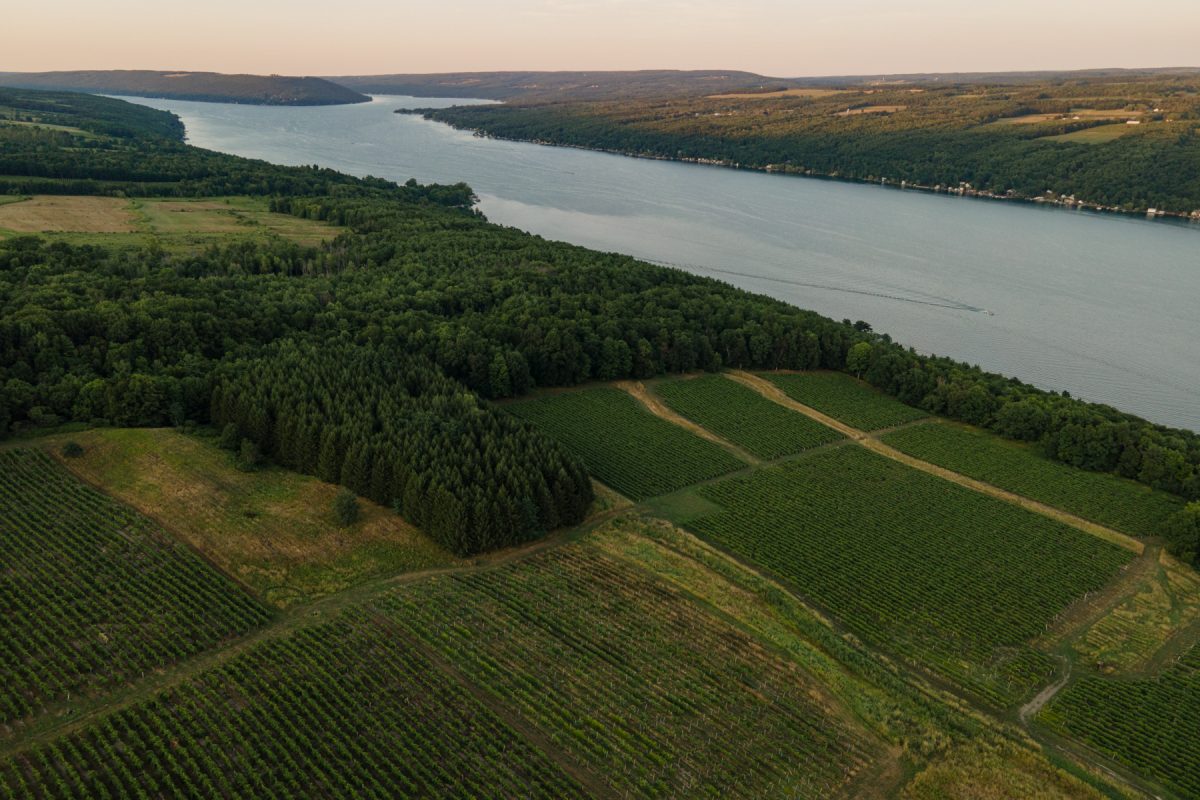 Looking to get away from New York City for a weekend? Just a few hours from the Big Apple is New York’s Finger Lakes region where you can find several Finger Lakes camping options on Campspot. This area boasts eleven long glacial-carved lakes, an acclaimed wine region, various universities, epic hiking trails with waterfalls, and much more. The steep inclines and panoramic views of the deep lakes (Seneca Lake measure 618 feet deep!), the acres upon acres of grapevines, and the starry nights had us feeling like we were on a romantic getaway.

Where to Camp in the Finger Lakes Region

Our Campspot was the Finger Lakes Campground in Prattsburgh, NY. The family-owned and -operated campground has a playground, pool, five-acre pond, outdoor pavilion, over seven miles of trails, and many area activities. The first night, after a quick walk and jog around the campground, we settled in for dinner around the campfire and some stargazing.

What to do in the Finger Lakes Region: Wine Tasting

The next day, after getting some work done thanks to campground wifi (woohoo!), we made our way to Ravines Wine Cellars along Keuka Lake, the “Y” shaped lake. The winery, which also has a second location near Seneca Lake, opened in 2001 by Morten and Lisa Hallgren, a Winemaker/Oenologist and Chef duo. At the time, Rieslings were an “off-dry and fruity style.” Realizing the potential for the region’s grapes to “be best expressed in a dry, focused, mineral-driven style,” Morten pioneered the Riesling style that the Finger Lakes area is now known for.

In the age of COVID, Ravines Wine Cellars expanded its outdoor seating and has added a temporary tent for some cool shade during these hot summer months. They are currently only accepting guests with reservations, and those can be made online on their website or by calling the winery. Tables sit distanced apart, the employees wear masks, and every seating area goes through sanitization before the next party can sit down.

We had the pleasure of being hosted by Chase, who graciously walked us through the tasting menu. After much deliberation, Tyler and I each selected five wines to taste. The wines, which were paired with a delicious loaf of fresh bread, were served upon a slate tray, a nod to the Finger Lakes area’s shale formations.

We tried two of their highly-acclaimed rieslings: the 2017 White Springs Vineyard and the 2017 Dry Riesling. Their 2017 Dry Riesling is Wine Spectator’s Top 100 Wines of the World! We’re not huge Riesling drinkers, probably because they have the connotation of being sweeter and fruitier, but these Ravines Rieslings definitely changed our minds. The minerality and the brighter taste are incredibly refreshing and connect you with the beautiful environment surrounding you.

Another favorite of ours was the 2018 Ayre, a semi-dry wine made from Valvin Muscat, a French-American hybrid grape developed by Cornell University. I mean, are we just lame wine nerds or how cool is that? To me, it symbolizes the owners’ French upbringing and their now-home in the United States.

What to do in the Finger Lakes Region: Take a Scenic Drive

After our wine tasting, we had an hour before our kayaking reservation, so we decided to drive around Keuka Lake on highway 54 with a stop at Keuka Lake State Park. Along the drive were various plaques and signs that told the geologic glacial past and the history and the continued presence of the Iroquois, or the Six Nations, and more.

What to do in the Finger Lakes Region: Kayaking

Making our way back to the south side of the lake, we met with Keuka Kayak, an affordable and family-run kayak rental, at Champlin Beach. If you’ve read our Q&A with Campspot, you know that I LOVE kayaking so I was so excited for this. It had gotten very choppy and windy so, as we made our way to the launch point, Keuka Kayak suggested a small inlet nearby that would be calmer and more enjoyable. The inlet was shallow and short in distance due to some fallen trees but it went through a relaxing wetland area that had great bird watching.

By the time we made our way back to the mouth of the inlet, the wind across the lake had thankfully died down enough to kayak across the lake to Depot Beach. Just as our two-hour rental came to a close, the sun cast a golden light across the lake. It was a perfect way to end our little adventure on the water.

Driving back to the Finger Lakes Campground, we stopped at a lookout to take in one last look and photograph the sun setting across the vineyards and water. We have had the pleasure of visiting some of the most beautiful wine regions in the country- Napa, Hood River, Walla Walla, and Traverse City- but the Finger Lakes has so much to offer and we know you’ll love it too. We want to thank the Finger Lakes Campground for being so hospitable and helpful and are excited to return soon. Cheers, everyone!