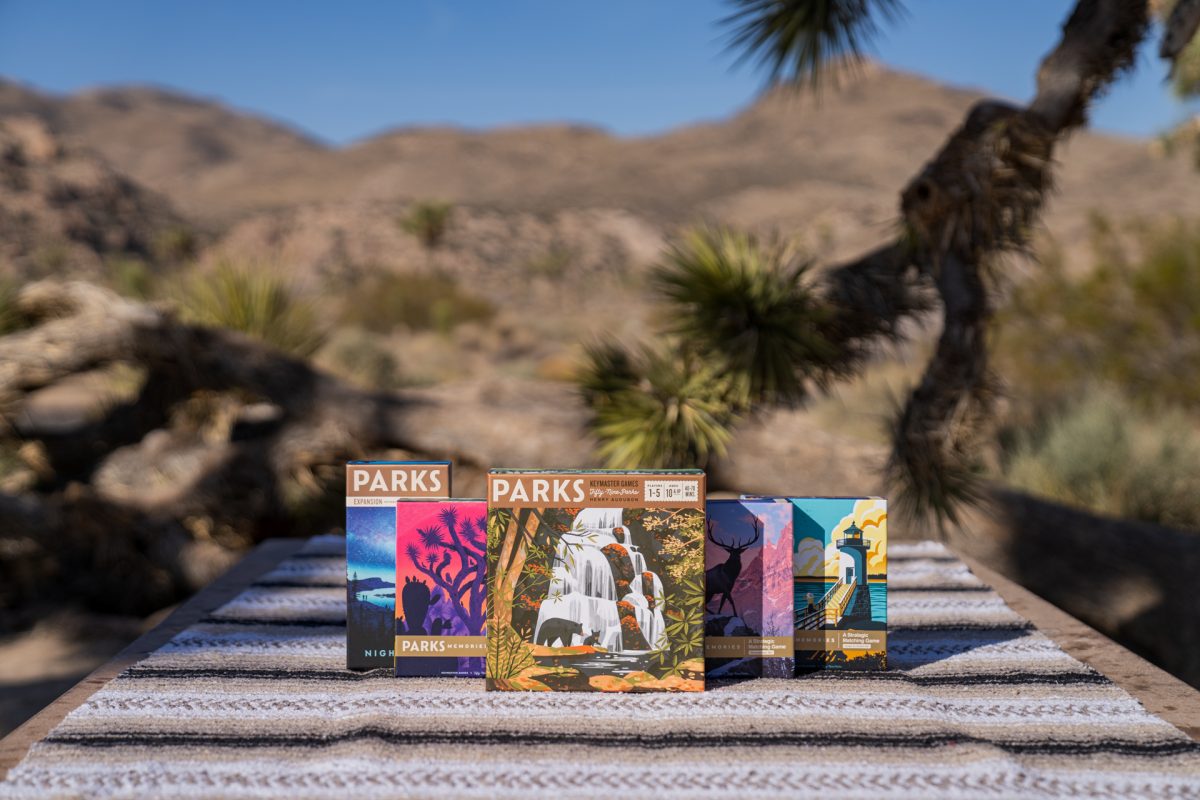 To celebrate the upcoming National Park Week that begins April 16, Campspot is thrilled to share that we’ve partnered with Keymaster Games again to give away $250 towards a Campspot booking and the Parks collection of games.

Keymaster Games began when Kyle Key found out he needed heart surgery and in the time leading up to the surgery, he found refuge in time spent playing board games with family and friends. This appreciation led him to realize how well board games brought people together, allowing them to form lifelong cherished memories. Thus, Keymaster Games was born with the mission to do just that.

In PARKS, players will take on the role of two hikers as they trek different trails across four seasons. While on the trail, these hikers will make actions and collect memories of the places your hikers visit. These memories are represented by various resource tokens like mountains, forests, and wildlife. Collecting these memories in sets will allow players to trade them in to visit a National Park at the end of each hike.

Each trail represents one season of the year, and each season, the trails will change and grow steadily longer. The trails, represented by tiles, get shuffled between each season and laid out anew for the next round. Resources can be tough to come by, especially when someone is at the place you’re trying to reach! Campfires allow you to share a space and time with other hikers. Canteens and Gear are used to improve your access to resources throughout the game.

The Parks Game Will Include:

The national parks exist to preserve many wonders of nature, but they also harbor some of the darkest skies and clearest views of the stars. This is the reason you might hear the saying, “Half the Park is After Dark.” It is the inspiration for PARKS Expansion: Nightfall.

Featuring more art from the Fifty-Nine Parks Print Series, Nightfall offers a whole new year of hiking for PARKS lovers to explore. It includes 24 new Park cards that reward instant actions when visited, a new Year deck along with ways to obtain new Year Cards while hiking, plus the introduction of Camping, which grants powerful once per season actions to those hikers that do not dally on the trail.

PARKS Memories is a stand-alone matching game that should feel instantly familiar while still offering new strategic depth to the genre. Every turn, players reveal two tiles attempting to match park types which grant single-use abilities. Then players take one revealed tile into their collection, blocking one other revealed tile with the Hiker. Use your abilities to reveal, reorganize, block, and hide Parks as you seek to collect 3 matching sets before your opponent(s).

You’ll explore iconic US landmarks and National Parks in Trails, a new game in the PARKS series. You’ll recognize art from the Fifty-Nine Parks Print Series as you take a leisurely stroll in the beautiful outdoors where you’ll collect acorns, spot wildlife, and earn wilderness badges… It’s time to hit the trails!

How to Enter To Win

The winner will be announced on Monday, 4/25 via email and in Campspot’s Instagram story.

Best of luck and see you on the trail!