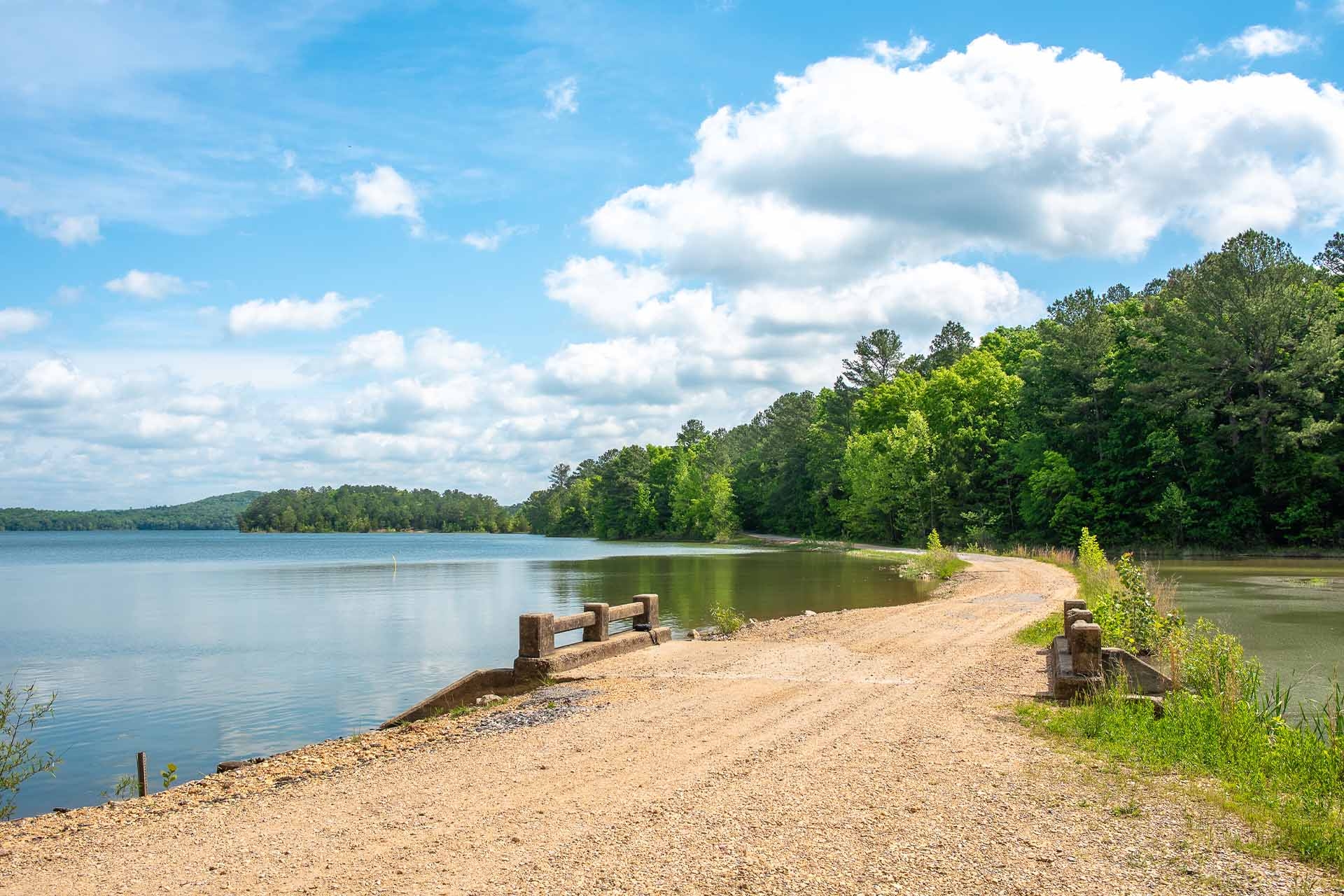 The Best Camping in Alabama

From endless waterfalls and aquatic trails to stunning cave systems and lush canyons, camping in Alabama offers no shortage of variety and beautiful sights. Explore this list of Alabama campgrounds to find the best fit for your interests.

About Camping in Alabama

Whether you’re eager to explore extensive cave systems or itching to canoe your way along the Mobile-Tensaw River Delta, camping in Alabama offers endless opportunities. Alabama campgrounds offer relaxing getaways, exciting adventures, and stunning vistas. From white sand beaches to deafening waterfalls, the best camping in Alabama will overwhelm your senses in the best way.

Southern Gulf states don’t always make outdoor lists for features outside of their beach hot spots. However, with several national forests and a strong showing of state parks, camping in Alabama offers far more options than just pitching a tent on the beach.

What’s the Best Time of Year to Go Camping in Alabama?

Spring and fall are both great times to go camping in Alabama, but fall is the best season of all. If you’re heading towards the Gulf to enjoy the beach, you’ll be best served to choose late spring or early fall. Summers are hot and humid and especially oppressive if you aren’t used to them.

What Are the Top Outdoor Activities in Alabama?

In the warmer weather, water sports are a popular choice. Whether you’re floating down the river or boating on the lake, being out on the water is the best way to keep cool during the heat of summer.

During the other three seasons, travelers can enjoy camping in Alabama and the cooler weather. Campers should note that Alabama can get below freezing in the winter, with certain areas of the state even getting dustings of snow.

What Are the National Parks in Alabama?

While there are no national parks in the state, there are four national forests that offer plentiful opportunities for hiking and camping in Alabama.

Created towards the end of the Great Depression by then-President Franklin Roosevelt, this popular forest covers almost 400,000 acres of Alabama wilderness. While there are multiple Ranger Districts, each with its own established campgrounds, you can always boondock if you want to enjoy free camping in Alabama’s national forests.

Much smaller than its counterparts, the Tuskegee National Forest is a less-trafficked destination, perfect for those looking to enjoy the solace of nature. If you’re looking for more primitive camping in Alabama, there are 14 established dispersed campgrounds, as well as thousands of acres available for free camping.

Surpassed in popularity only by the Talladega National Forest, William B. Bankhead is easily one of the most popular destinations for camping in Alabama. With almost 100 miles of multi-use recreational trails, this is the perfect place to spend a camping weekend.

If you want peace and quiet, there’s no better choice in the state of Alabama. Even less trafficked than the Tuskegee National Forest, you almost have to go out of your way to camp near someone else. This should be at the top of your list if you want to park yourself among the trees and enjoy some much-needed solitude.

What Are Some of the Most Popular State Parks in Alabama?

While not the most popular Alabama state park, it sure is up there. Oak Mountain is around a century old, established by the Alabama State Lands Act of 1927. The park has grown significantly since its inception, now more than 10 times larger than it was in the early 20th century.

Alabama isn’t exactly what you think of when it comes to peak bagging (when hikers and climbers try to summit peaks on a given list), but Cheaha State Park does hold the Cotton State’s highest point. While 2,413 feet above sea level may not be mind-boggling, this park does give you a great surrounding view and puts you at the southernmost tip of the Appalachian Mountain Range. Those looking for more comfortable camping in Alabama can book a cabin or A-frame chalet.

This is by far the most popular park in the state, mainly because of its proximity to the Gulf of Mexico. If you’re looking for a spot to go camping in Alabama when the weather is good, Gulf State Park can’t be beaten. You won’t exactly have the place to yourself, but it’s an extrovert’s paradise during peak season.

Originally a Civilian Conservation Corps (CCC) site, Desoto State Park lives on well past the CCC. Sitting in northeast Alabama, you’re positioned well to check out the neighboring states and parks on an extended road trip.

What Are the Top Attractions in Alabama?

This is the perfect stop for space enthusiasts, young and old. A Smithsonian associate, the U.S. Space and Rocket Center (USSRC) also serves as the visitor center for the Marshall Space Flight Center. Check out the list of exhibits and see what excites you! If nothing else, the USSRC has brought back its Biergarten on Thursday evenings.

Huntsville is a great stop on a trip to Alabama, and it’s routinely ranked as one of the best places to live in the U.S. The botanical garden holds more than 100 acres in an otherwise tech and maritime-focused city. While there’s plenty to explore here, you can see the highlights in a couple of hours if you’re short on time.

Known as the BMA, the Birmingham Museum of Art holds one of the most extensive collections in the southeastern U.S. In a former boom city looking to revitalize, the BMA is at the center of arts and culture in Birmingham. Most featured exhibits will be on rotation for six months to a year, so you’ll have time to plan out what you want to see.

This is one of the most fascinating pieces of architecture in the entire state. Located on the grounds of the only Benedictine monastery in the state, the Ave Maria Grotto features a miniature city carved by hand from a 20th-century monk. Known as Jerusalem in miniature, this mini-town spans four acres and features over 100 significant locations from around the world.

Where’s Some of the Best Food in Alabama?

Found in one of the more popular areas in Birmingham, Five Points South, Chez Fonfon is an upscale casual bistro serving French fare. While you’re in one of the South’s most historically-significant cities, it feels like a trip to Paris when you walk through the doors of Chez Fonfon.

Fisher’s actually has two restaurants in one, but the upstairs is, fittingly, more upscale. If you’re looking for something a bit more relaxed, check out Fisher’s Dockside. However, if you’re looking for a meal you’ll remember, Fisher’s Upstairs routinely receives awards and high praise for its upscale Southern-style plates.

Also known as Grille 29, this is one of the must-stop spots in Huntsville. While in a bustling city with a high quality of life, Grille on Maine manages to stand out among the staunch competition. Featuring a surf-and-turf menu in a relatively modest price range, this is a great spot for both lunch and dinner, but it can’t be missed either way.

Even if they exclusively served cold french fries, SpringHouse would be a hotspot. Don’t worry; the menu is one of the best around, offering Southern-style fine dining. When it comes to ambience, though, SpringHouse competes with the best restaurants in the South. Located on a hilltop, SpringHouse is a charming stone-and-wood house that keeps much of its original character and offers beautiful scenery while you enjoy your meal.

While it doesn’t top a lot of travel lists, Alabama holds hidden gems if you know where to look. With a rich culinary scene, the Cotton State attracts a wide range of travelers. If you’re more interested in pitching a tent than reserving a table, camping in Alabama is sure to hold up to your expectations.