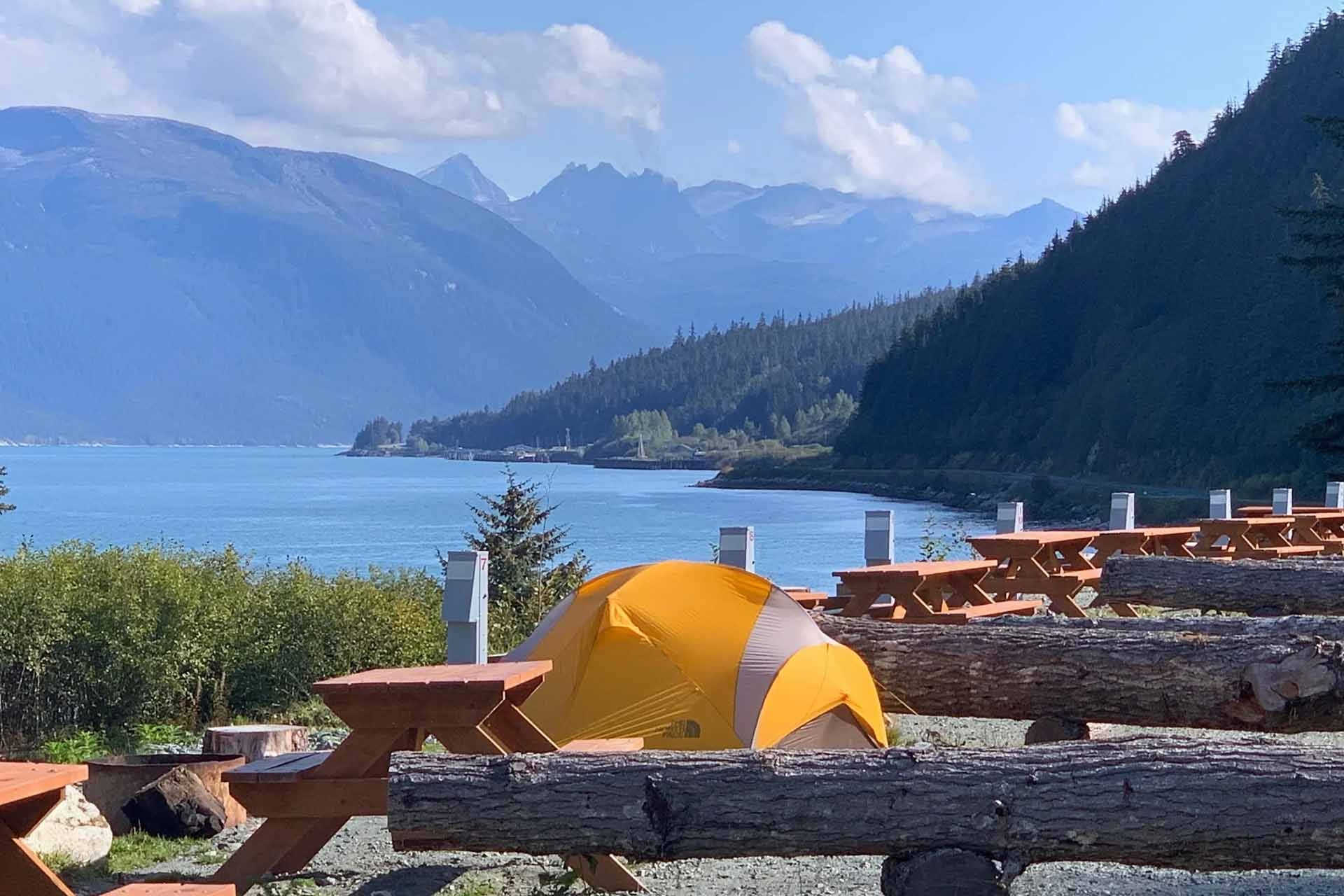 The Best Camping in Alaska

Camping in Alaska is (probably) as close as you’ll ever get to camping on another planet. Towering mountain peaks, sprawling wildflower fields, glacier viewings, and unparalleled wildlife sightings await at Alaska campgrounds.

About Camping in Alaska

Discover the true meaning of adventure in Alaska’s untamed wilderness. Home to eight national parks, Alaska offers deep beauty alongside challenging adventures. From snow sports and backpacking to wild berry picking and bear-watching, there’s no shortage of things to do when you’re camping in Alaska, the state aptly known as “the last frontier.”

The Last Frontier is a place explorers have been enchanted by for years, and for good reason. Camping in Alaska is a once-in-a-lifetime experience for most people. Even if you’re lucky enough to go more than once, each experience is new and unique. While some parts of the state are relatively developed, you’ll still want to double-check that packing list when heading to the 49th state.

What’s the Best Time of Year to Go Camping in Alaska?

Unless you’re prepared to really gear up for the cold, summer is the time to go camping in Alaska. Summers are fairly moderate, though the humidity can become uncomfortable if you go during an unseasonably warm year. Regardless, expect comfortably cool temperatures and long days during the summer, perfect for adventuring.

What Are the Top Outdoor Activities in Alaska?

What aren’t the top outdoor activities in Alaska? Well, maybe surfing (even then, there are still a few spots you could reasonably surf). Hiking and camping in Alaska are incredible in the summer, but many travelers are also there for the fishing and water-sports. There’s really no outdoor activity you can’t do in the Last Frontier.

What Are the National Parks in Alaska?

There are a wealth of national parks and protected wilderness areas in Alaska. Alaska has eight total national parks, outdone only by California with nine. Camping in Alaska has seemingly limitless options, and while you should explore as many national parks here as you can, here are four of the best.

The greatest name recognition of all Alaska parks goes to Denali (though Wrangell-St. Elias might make a good case too). Denali National Park is the pinnacle of all things outdoors in Alaska and is home to the highest point in North America, Mount Denali, at 20,310 feet. Camping in Alaska comes with a multitude of great options, but Denali is going to top most travelers’ bucket lists—and for good reason!

Kenai Fjords National Park is a unique experience, even by Alaskan standards. The fjords themselves are a sight to behold, and a boat tour is a must when visiting. Most of the park is only accessible by boat, though Exit Glacier is accessible by road for those with a car. There are several short, well-maintained trails, but the longer trails, like the Harding Icefield Trail, require four-digit elevation gain in a mile or less with varying weather conditions. If that sounds a bit much, consider renting a kayak and setting out on the water.

We have three words for you: Fat Bear Week. Every year, Katmai National Park hosts an informative, March Madness-style showdown that tracks how much weight each bear in the park’s ecosystem puts on before hibernation. That alone is cool enough to make the park interesting, but it’s also an outdoor playground for those willing to undertake the rugged challenge of visiting.

Katmai is easily one of the most entertaining parks in the whole National Park Service (NPS) system. The nature-watching here is unparalleled, with thousands of brown bears calling the park home. While much of the land here is undeveloped wilderness, visitors will at least want to check out Brooks Camp. Brooks Camp is a popular spot to see bears and other wildlife, but those who wish to visit need to be prepared and attend a bear safety talk first.

While not easy to get to, Glacier Bay National Park actually sees more visitors than most Alaska national parks. Glacier Bay is basically situated in Canada as it’s located in the panhandle portion of Southeast Alaska, directly south of Yukon Territory and next to British Columbia. You are still camping in Alaska, even if it feels like Canada, though. Because of its unique location, you’ll need to either fly or boat into the park.

What Are Some of the Most Popular State Parks in Alaska?

Near Alaska’s most populous city, Anchorage, Chugach State Park protects nearly half a million acres of rugged Alaskan wilderness. If you’re flying into Anchorage and looking to explore around the area, Chugach gets you quickly out of the city and into the most authentic version of the state. This is about as conveniently-located as camping in Alaska gets, so be sure to take advantage of it!

The national park isn’t the only thing out there. If you find just a few too many people in the national park for your liking, the Denali State Park is just to the east. You’ll get some of the best views that you’d get in Denali National Park but have even more room to yourself to explore.

This unique state park is on the northern edge of the greater Kodiak Island area. You won’t find a whole lot of traffic at Shuyak Island State Park, but isn’t that part of the charm? You’ll need to get here by float plane or boat, and there are no amenities when you get there. For those looking for a true taste of the Alaskan wilderness, this is it.

If your plans include a visit to Haines or Skagway in the panhandle area, Chilkat State Park is a must-visit. The park features three established trails, and they’re all fairly accessible and moderate. This is one of the more remote options for camping in Alaska, but nature lovers will be treated to some great wildlife viewing.

What Are the Top Attractions in Alaska?

Museum of the North

Run by the University of Alaska Fairbanks, the Museum of the North tells the story of this mystical state from its earliest peoples to today. This museum offers an immersive experience that teaches about the architecture, people, culture, and wildlife found in the Last Frontier.

This is the flagship of the Alaska Railroad and one of the most incredible experiences in the state not found in a national park. The Denali Star is a 12-hour train ride from Alaska to Fairbanks that takes passengers through 356 miles of some of Alaska’s most beautiful terrain.

Most of the Alaska-Canada (AlCan) Highway is in Canada, but the portion of the highway in Alaska is worth the extra miles to visit. Roughly 200 miles of the official highway are in Alaska, making it a perfect day drive for photographers and road trippers alike.

The unofficial end of the highway is technically in Fairbanks. Should you want to take it all the way to Fairbanks, the trip will be just under 500 total miles instead.

It’s a bit of a novelty, but this Fairbanks Museum is still worth the visit. The museum is kept at 25 degrees year-round to preserve the ice sculptures and art that are kept there. Beyond the art, it also holds the coolest bar (pun intended) in the Fairbanks area. Don’t worry, you can rent a parka!

Where’s Some of the Best Food in Alaska?

Those looking for casual dining options will always find Moose’s Tooth as a recommendation for visitors. This pub is an Anchorage institution and a sight to behold. The art here is jarring but in a fun, psychedelic way. Plus, the beer and comfort food are a top-tier choice in the underrated Anchorage bar and restaurant scene.

You wouldn’t think this is one of Alaska’s best eateries just by looking at it, but don’t be fooled. The Crepery is quite possibly the best breakfast spot in the state. They serve simple crepes and coffee but with a high degree of precision that keeps loyal customers and visitors raving.

If you’re staying in the Southeast and not venturing into Interior Alaska, you’ll unfortunately miss The Crepery. All is not lost, though, if you visit Two Sisters Bakery! This quaint little bakery won’t be beaten for food quality or ambiance.

This bistro has a wine list a mile long but, true to its Alaskan form, is far from fussy or pretentious. Like the rest of the state, it’s high-quality without being haughty. If you’re looking for a nicer dinner spot, this is one of the best choices in Anchorage.

Camping in Alaska is a bucket list item for many seasoned adventurers. While it takes some work to get here, the unparalleled wilderness experience is something you’ll always remember.