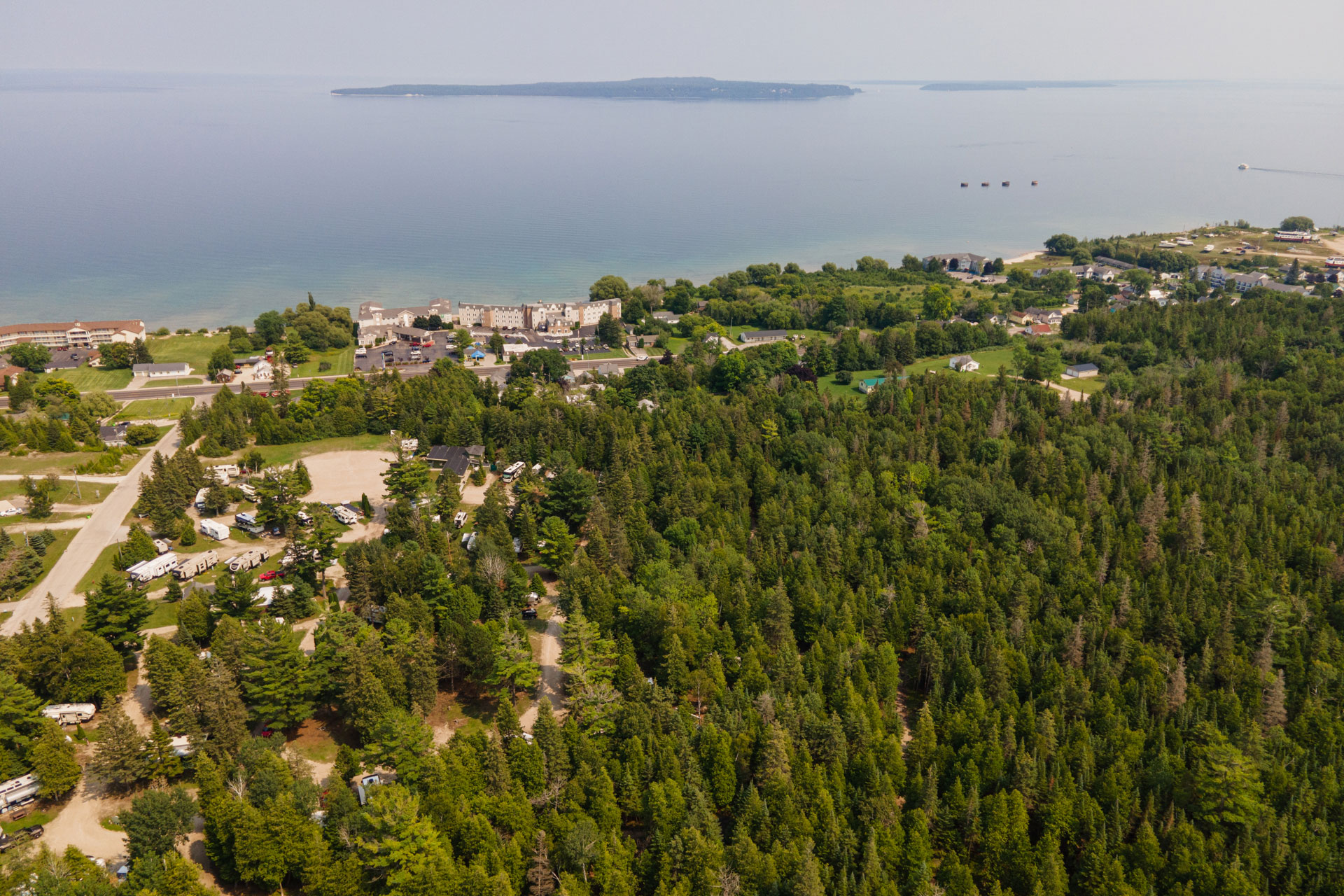 Sandy beaches and countless parks beckon from campgrounds near Mackinaw City. Whether you’re overdue for a relaxing getaway or an exciting new adventure, a Mackinaw City camping trip should top your list!

About Camping Near Mackinaw, MI

Camping near Mackinaw City, MI—located on the northern tip of Michigan’s Lower Peninsula—offers a wide variety of forests and lakeshores within driving distance. While mainly centered around nearby Mackinac Island (pronounced the same as Mackinaw—fun fact), Mackinaw City is its own unique Northern destination.

What’s the Best Time of Year to Go Camping Near Mackinaw City, MI?

Summer is the most popular time to go camping near Mackinaw City, MI, because of the long days and beautiful, moderate weather. This does mean that crowds are also at their peak during summer, so plan accordingly.

Fall and spring, while not as popular as summer, have lots to recommend themselves by. In springtime, travelers can beat the summer rush if they’re willing to be outside in the chilly temperatures this far north. In March and April, highs are in the 30s and 40s, and lows are routinely below freezing. Fall has slightly warmer weather, as well as the advantage of the changing leaves.

What Are the Top Outdoor Activities Near Mackinaw City, MI?

Hiking and camping near Mackinaw City, MI, are always popular choices, especially in the good summer weather. For those who don’t mind the colder weather, camping season here can stretch from mid-spring to mid-fall. Since Mackinaw City is right on the water, kayaking, boating, and other water sports are perennially popular as well.

What Are the National Parks Near Mackinaw City, MI?

There are three national forests in the Mitten State, with two of them near Mackinaw City. The most accessible camping near Mackinaw City, MI, is in the Hiawatha National Forest just half an hour away. While there are endless sightseeing opportunities in the Hiawatha National Forest, there are four main zones for the best scenery, with the East Zone holding some of the best views.

This is sort of cheating because the Huron and Manistee National Forests are technically separate. However, they’ve been managed as one unit since 1945. The two forests sit on the western coast of the state, making forconvenient camping near Mackinaw City, MI, as well as more southern cities like Grand Rapids and Lansing.

While free camping is available in Huron-Manistee National Forest, the forest also has established campgrounds that don’t require permits.

This National Park Service (NPS) site is on the southern shore of Michigan’s most famous lake, Lake Superior. Pictured Rocks is not an exaggeration as this national lakeshore holds incredible sandstone formations that give the park its name. There’s plenty to keep visitors occupied, whether you want to wander the lakeshore or hike through the woods.

While Pictured Rocks gets more press, Sleeping Bear Dunes National Lakeshore is worth the extra 45-minute drive. While further than most of the other options, the lakeshore’s namesake dunes are massive and exciting for visitors of all ages. If time is of the essence, one trail everyone should see is the Sleeping Bear Heritage Trail.

What Are Some of the Most Popular State Parks Near Mackinaw City, MI?

Visitors here at night can observe the unobstructed night sky in the designated preserve, offering some of the best stargazing access in the state. After stargazing, there are 250 campsites to choose from, making Wilderness State Park one of the best spots for camping near Mackinaw City, MI.

This small state park is near St. Ignace, Michigan, just a short drive from Mackinaw City via the Mackinac Bridge. Straits State Park has three campgrounds that accommodate tent and RV travelers. For those seeking extra comforts, the mini cabins in the Lower Campgrounds offer some of the most comfortable camping near Mackinaw City, MI. The park not only features plenty of great trails but also tells some of the 17th-century history of the area.

This is easily the biggest draw of all the options for camping near Mackinaw City, MI. Mackinac Island State Park is a beautiful and very popular spot to spend a night or weekend. Interestingly enough, Mackinac Island is a former national park, though it lost its designation just before the turn of the 20th century. In fact, it was the second U.S. National Park after Yellowstone. Summers here are exciting, but be sure to get your reservations well in advance.

Not to be confused with the Sheboygan in Wisconsin, this state park is one of the less-trafficked options for hiking and camping near Mackinaw City, MI. The park does span more than 1,000 acres, though, meaning hikers have more than enough room to stretch out and enjoy well-groomed trails and waterfront views.

What Are the Top Attractions in Mackinaw City, MI?

While the name is a bit of a mouthful, Colonial Michilimackinac is a state historic park centered around an 18th-century fort and trading village. Visitors are transported to the late 1700s upon entrance to the fort, meaning an experience of Revolutionary War history through a lens far from the original 13 colonies.

Old Mackinac Point Lighthouse was constructed in 1892 (when it was just Regular Mackinac Point Lighthouse, but we digress). While part of Fort Michilimackinac State Park, the lighthouse is worth a visit on its own, even if you aren’t seeing the whole state park. The lighthouse is open to the public for tours so visitors can actually see the inner working, including the original lens.

While summer is a popular time, winter travelers have a shot at seeing the Northern Lights here. Visitors can stay throughout the night, but the park makes it clear that this isn’t an option if you’re looking to go camping near Mackinaw City, MI.

Mackinac Island isn’t restricted to just the state park. While the park draws many visitors, the island itself is a great place to spend the day enjoying the food, shops, and just walking through the historic streets.

Where’s Some of the Best Food in Mackinaw City, MI?

Audie’s is a Mackinaw City institution, even being voted the “Best All-Around Restaurant” in northern Michigan. Audie’s has something for everyone, with two restaurants and a lounge in the same place. For families, there’s “the Bridge,” and for those looking for something a bit more upscale, the Chippewa Room bills itself as “casual fine dining.” Not looking for a full meal? Stop into the welcome lounge and grab a drink.

There’s nothing quite like a local fish spot when in northern Michigan. Scalawag’s serves all the classics that one expects from a fish and chips restaurant. While Scalawag’s hasn’t re-invented the wheel, no one is asking them to. The classics keep getting served, and they keep making patrons happy. Like much of Mackinaw City, though, note that Scalawag’s is open seasonally from April to October.

Mackinaw Bakery has changed hands several times, but only between different generations of the same family. This family-run baker has been a part of Mackinaw City for decades and is the best stopping point for anyone looking for a quick and light breakfast.

Mackinaw City is a long-standing resort town guiding visitors through the best and most beautiful attractions in northern Michigan. For travelers looking to go camping near Mackinaw City, MI, there are no bad choices, whether on the shoreline or among the trees.