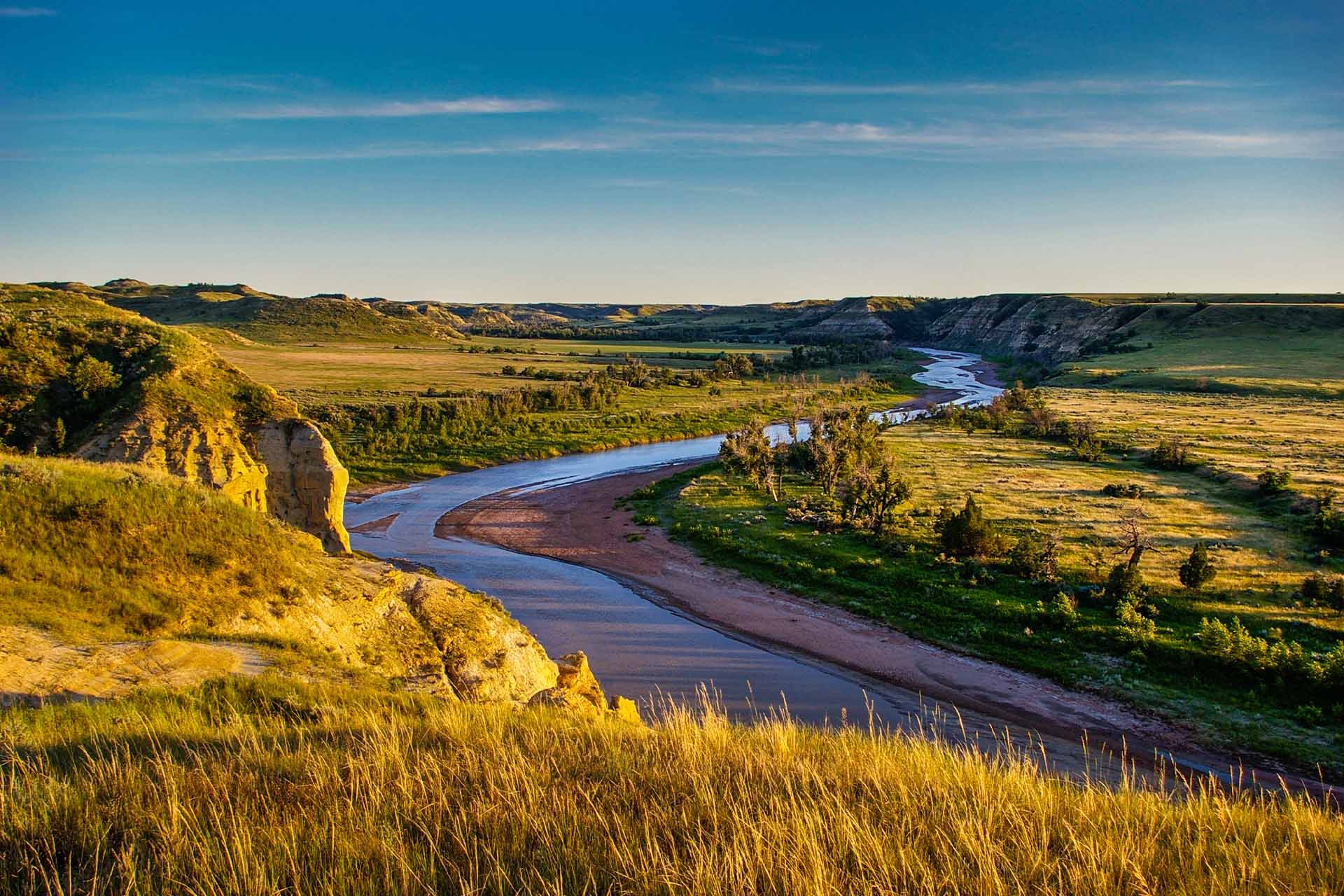 The Best Camping in North Dakota

Relish the peace and quiet of camping in North Dakota in stunning spots like Spiritwood Lake, or get your blood pumping on hikes like the Caprock-Coulee Trail. Find the right North Dakota campground for you by browsing this list!

Lush greenery, expansive water features, and scenic hiking trails keep campers in North Dakota busy and satisfied. Take a visit to Theodore Roosevelt National Park for breathtaking views of valleys and colorful vistas, or hop in a kayak at Pelican Point. Whatever your speed, camping in North Dakota offers activities for the whole family.

While it doesn’t often grace the cover of travel magazines, North Dakota is hiding some of the best outdoor spots in the Great Plains region. Camping in North Dakota mainly centers around the state’s national park, but outdoor adventurers of all stripes can find something that intrigues them in the Roughrider State.

What’s the Best Time of Year to Go Camping in North Dakota?

Temperatures can creep above 90° in the middle of summer, so spring and fall are going to provide more comfortable hiking and camping in North Dakota. If you can only travel during the summer, though, you can still enjoy the state’s parks and trails.

What Are the Top Outdoor Activities in North Dakota?

The Roughrider State has pretty much every outdoor pursuit you can think of, from hunting and fishing to hiking and biking and anything in between. Water sports? Check. Backpacking trails? Got those too. Equestrian trails? You better believe it! Camping in North Dakota? Yeah, absolutely. If you can think of it, you can do it here!

What Are the National Parks in North Dakota?

There’s only one national park in the state named for one of the most iconic outdoorsmen in American history. However, outside of the national park, there are several sorts worth visiting for both day trips and camping in North Dakota.

It’s fitting that the only national park in the Roughrider State is named for Theodore Roosevelt. While it’s out of the way, Theodore Roosevelt National Park offers some of the best camping in the state. It also has two separate units (north and south) that are both worth visiting, though the South Unit is more popular.

Sheyenne National Grassland is the only grassland in the Tallgrass Prairie Region of the United States. It also holds the best free camping in North Dakota, so win-win. While the U.S. doesn’t have nearly the amount of true tallgrass prairie land that it used to, North Dakota still holds some of those roots from the earlier history of the country.

The North Country National Scenic Trail (NCT) covers sizable portions of the northern United States, as the name suggests. More than 400 miles of that trail are in North Dakota, covering roughly two-thirds of the state. While it’s not the most popular destination for camping, hopping on the trail for a day hike or even an overnight backpacking trip can be a fun change of pace.

This isn’t exactly a popular spot for camping in North Dakota, but there aren’t a whole lot of National Park Service sites out this way. What Fort Union does offer is a really fascinating look into one of the most important trading posts in the entire United States during the 19th century. Visiting this national historic site is a great way to get a sense of the history of the portion of the country you’re visiting.

What Are Some of the Most Popular State Parks in North Dakota?

The main draw of this state park, as you might expect, is the Turtle River. While North Dakota is often over-simplified to just a plains state, it’s terrain is actually quite diverse, and Turtle River State Park puts that on display. With a wealth of trees lining the 775 acres of parkland, it’s the perfect place to spend a shady summer day on the riverbanks.

Located on Lake Sakakawea, this is another great warm-weather destination for hiking and camping in North Dakota. With an on-site marina, Lewis and Clark State Park makes it easy for visitors to spend a day out on the water. Once you head back towards the land, you’ll have nearly 100 campsites to choose from.

Icelandic State Park brings visitors on a trip through the history of North Dakota to its homesteading roots. Established in the mid-1960s, this park is equal-parts tribute to North Dakota's early immigrants and settlers and public access to lakefront adventure.

While Icelandic State Park is a nod to the early homesteaders of the state, Fort Ransom actually preserves a pair of homesteader farms and their historical significance. It also offers some of the more interesting choices for lodging and camping in North Dakota. While you’ll find standard campsites here, you can also stay in one of the homesteads, a yurt, or a covered wagon.

What Are the Top Attractions in North Dakota?

Buffalo has been integral to the plains way of life for centuries, and the National Buffalo Museum preserves that heritage. Besides the history of the buffalo, it also houses some fascinating Native American art and artifacts for visitors to enjoy.

Located in the state’s most populous city, Fargo, the Plains Art Museum is a different take on arts and culture in North Dakota. The permanent collections are those that the museum feels best represent the values of its mission of “connecting art, artists, and audiences to foster creative, resilient, and welcoming communities.” Guided tours are available, but you’re also free to walk through at your own pace.

Haven’t seen enough wildlife yet? Well, head to the state capital and take in the Dakota Zoo. Founded in the middle of the 20th century, this 600-animal zoo is actually the third zoo built in the state. While built third, it’s definitely the biggest and most impressive in the state.

Where’s Some of the Best Food in North Dakota?

Locally owned and operated, this spot in the state’s capital is one of the best fine dining experiences in all of North Dakota. While that doesn’t sound like a competitive market, you’d be surprised. Pirogue Grille has a seasonally-rotated menu of high-class American cuisine, mainly centered around local bison and other meat.

This just sounds like a trendy eatery and very much lives up to the name. This Fargo spot serves New American cuisine to pair with their list of signature cocktails in an upscale casual dining experience. If you’re here in the warm weather, try to grab a table on the terrace!

No, the tacos are not spinning around at 33 revolutions per minute, but there is more vinyl here than a typical taco shop. The whole spot is themed around music, but the tacos still take center stage. The menu mainly consists of Mexican street fares, but if you’re looking for a fun bar to stop into, Vinyl Taco’s cocktail menu will not disappoint either.

Rhombus Guys is the pizza joint to pop into if you’re visiting Grand Forks. With a menu full of inventive options, there’s certain to be something for everyone here. As with any good local pizza place, there are plenty of beer choices to look through as well.

You might not have camping in North Dakota on your bucket list, but you’ll wish you had visited sooner whenever you get there. With beautiful, untouched land perfect for adventure, North Dakota calls out to any traveler looking for a new challenge. If you’re on a quest to see all 50 states, though, consider leaving it for last.