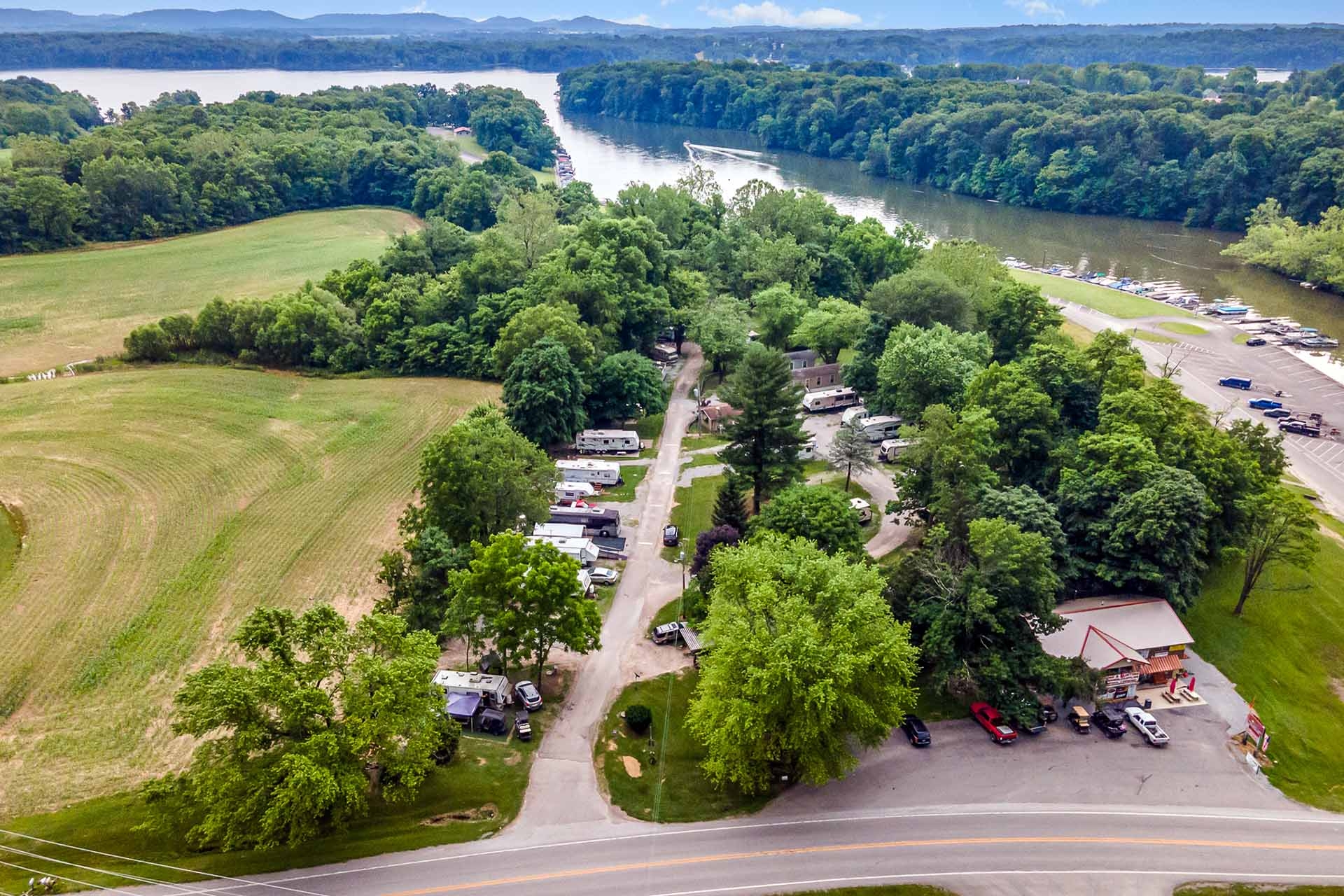 The Best Camping in Ohio

Whether you camp to stargaze, to fish, to hike, or to sit back and enjoy natural beauty and fresh air, camping in Ohio fits the bill. Explore this list of Ohio campgrounds to begin planning a refreshing getaway.

Home to natural wonders like Old Man’s Cave, the Lake Erie Bluffs, and Cuyahoga Valley National Park, the Buckeye State surely doesn’t disappoint. Camping in Ohio is full of unique opportunities for adventure, from exploring colorful caverns to taking in the views of phenomena like Natural Bridge. For tranquility and relaxation, there’s nothing quite like camping in Ohio.

While famous for football and Skyline Chili, Ohio is also a destination for outdoor enthusiasts searching for places less trafficked. Its beautiful forests and rivers are sights to behold for anyone looking to get in touch with nature without the crowds. Camping in Ohio is underrated (for now), so head there before everyone else finds out!

What’s the Best Time of Year to Go Camping in Ohio?

Camping in Ohio follows a pretty standard season from the end of spring to the beginning of fall. Those traveling during the summer peak season will find that the campgrounds in Ohio don’t see the crowding other states do. While you won’t be alone, you’ll have much more room to breathe, even at popular spots.

For those who can travel outside of peak season, fall is arguably the best time to go camping in Ohio. Fall brings changing leaves and relatively moderate temperatures before winter sets in, making it a perfect camping season for those who can schedule it.

What Are the Top Outdoor Activities in Ohio?

Hiking and camping in Ohio are by far the most popular outdoor activities. Cuyahoga Valley National Park, for instance, brings outdoor enthusiasts to the trails. However, you’ll also find ample water sports opportunities in Ohio as well. Kayakers and canoers tend to head for the Mohican River and Hocking River.

What Are the National Parks in Ohio?

There’s only one true national park in Ohio—Cuyahoga Valley. However, the state also boasts a robust state park system and a popular national forest.

Cuyahoga Valley is actually much closer to some of Ohio’s metro areas than you might think. It’s roughly halfway between Cleveland and Akron, though you wouldn’t know it when you visit; city life feels much farther away when you’re in the thick of this national park. Because of its location, visitors flying in have several reasonably close airports to choose from, including Cleveland, Columbus, and Pittsburgh.

Some of the best offerings for hiking, water sports, and camping in Ohio are found in this national park. If you’re traveling here in the colder seasons, Cuyahoga Valley becomes a winter sports paradise when the snow falls.

You’ll find Ohio’s only national forest in the state's southern section. Nestled in the Appalachian foothills, the Wayne National Forest feels like a patch of land set apart from the rest of the state. Wayne National Forest offers a variety of camping comfort levels, as well as miles of multi-use trails. This sprawling national forest provides great options for peace and quiet if you stick to the less-trafficked areas, though the popular areas do see decent visitation rates.

The North Country National Scenic Trail (usually shortened to NCT) runs for nearly 5,000 miles and traces the edges of the state of Ohio. The NCT runs all along the western and southern borders of the state. From there, it continues roughly halfway up the eastern edge of the state before moving into Pennsylvania.

It’s easy to hop onto this long trail from places in over half the state. Even if you aren’t looking for a thru-hike, there are some great day hikes throughout the Ohio stretch of the NCT.

The Lewis and Clark National Historic Trail ends in Western Pennsylvania, with the last leg of the trail running along the southern border of Ohio. This trail is nearly 5,000 miles long, with Ohio being the second to last of the 16 states the trail runs through.

There are several spots of interest in the Ohio portion of the trail, including Historic Fort Steuben and the Eulett Center at the Edge of the Appalachia Nature Preserve.

What Are Some of the Most Popular State Parks in Ohio?

Hocking Hills is easily the most popular state park here, with over 4 million annual visitors. You have over 2,000 acres to explore, but if that isn’t enough, the Hocking State Forest adjoins certain sections of the park.

Hocking Hills is also one of the most popular spots for camping in Ohio, with 169 total campsites to choose from. Note that all these campsites require reservations, and no walk-ins are allowed.

Located in Southwest Ohio, Caesar Creek State Park encompasses a nearly 3,000-acre lake. While the lake is the main selling point, you’ll also find plenty of shaded hiking trails of varying difficulties. Inexperienced hikers or those looking for easier routes will be better served at other state parks, as all the hikes here are rated from moderate to difficult.

John Bryan State Park is on the smaller end at only 752 total acres, but it offers a unique view of a limestone gorge cut from the Little Miami State and National Scenic River. The campground here is smaller than some of the other options for camping in Ohio, but it still has 56 total sites.

For visitors looking for more luxurious accommodations when camping in Ohio, Maumee Bay State Park is about as good as it gets. A resort lodge on-site offers you plenty of creature comforts during your visit to Maumee Bay. If you want to commune with nature a bit more, you have the option of cabins or tent camping as well.

What Are the Top Attractions in Ohio?

Rock and Roll Hall of Fame

Music fans know that one of the hallmarks of the industry is located in Cleveland, Ohio. Any enthusiast will want to make a pilgrimage to these hallowed halls to see tributes to the stars of yesteryear. Check the calendar to see what exhibits will be on display when you plan to visit!

Cedar Point Amusement Park is well-loved in the region but not as widely known the further you get from Ohio. Roller coaster fans may recognize this park as the place that bills itself as the “Roller Coaster Capital of the World.” With 70 rides of various intensity levels, this isn’t an empty claim.

Want to spend a cultured afternoon in Cleveland without spending any money? Well, admission to the Cleveland Museum of Art is always free! This museum is well known for its Asian and African art collections, but fans of Renaissance-era styles won’t be disappointed either.

There’s no better honor for a football player than being enshrined in Canton, Ohio. NFL fans can’t miss a visit to the mecca of all things football. Even if you aren’t an avid NFL fan, the Hall of Fame offers a great historical insight into the American game and how it’s progressed over the decades.

Where’s Some of the Best Food in Ohio?

Often shortened just to Z Cucina, this Italian spot walks the line between upscale and approachable. With a menu full of mid-range prices on fresh, seasonal dishes, there are few better places in the whole state to appreciate Italian food.

If you want something a bit fancier than Z Cucina, Metropole is an upscale restaurant and bar serving a seasonal, New American menu. Half the fun here is the ambience since Metropole is actually in Cincinnati's 21c Museum Hotel. This historic museum has been modernized and features a hotel, a new museum, and one of the best restaurants in the city.

Old museums not interesting enough for you? Fair enough. Try the Buckeye Express Diner on for size, then. This small spot is a converted vintage rail car. Food is unfussy and comfortable, and parents will love the outdoor play area that’s attached to the restaurant.

In the small town of Lebanon, Ohio, is a well-kept secret. It’s a hotel-and-restaurant over 200-years-old that has served presidents, statesmen, and maybe you too! If you want to just sit down for a drink, check out the associated Black Horse Tavern next door.

With a pair of long trails passing through Ohio (to complement its national park and forest), hiking in the Buckeye State is always plentiful and enjoyable. Whenever your travels take you here, camping in Ohio offers the perfect way to get away from it all among tranquil forests and calming rivers.