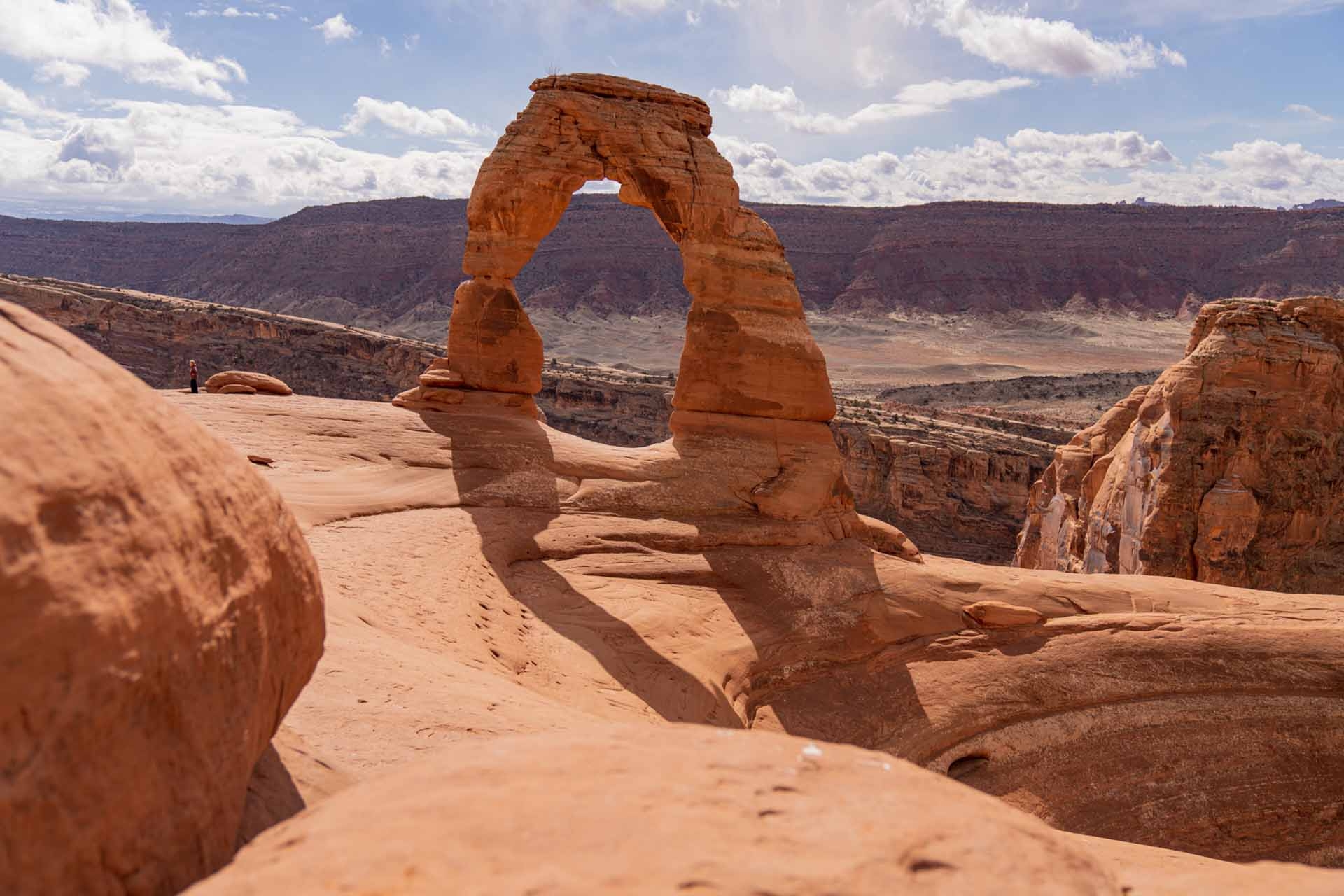 The Best Camping in Utah

Best known for hotspots like Arches National Park and Zion National Park, camping in Utah is unbeatable for anyone interested in hiking, climbing, and observing unique and stunning rock formations. Browse this list of Utah campgrounds to get your travel plans underway.

Pack the tent and the camera and prepare for some of the most stunning views in the nation! Taking in the vibrant colors of Bryce Canyon National Park, squeezing through rock formations at Little Wild Horse Canyon, and snapping photos of Mirror Lake’s serene beauty are just a few of the activities available when you’re camping in Utah. From Moab to Zion, there’s no shortage of beauty and adventure to be found in Utah.

Read Next: The Best Campgrounds in Utah Near National Parks

Camping in Utah is one of those quintessential experiences on any good outdoor adventure bucket list. The Beehive State (yep, that’s its nickname) is one of the best states for outdoor pursuits. This place is filled with such outdoor prowess that its state parks could be national parks in half the country. If you haven’t already been here, it’s time to visit!

What’s the Best Time of Year to Go Camping in Utah?

You really need to be prepared if you’re summer-camping in Utah, as sections of the state can get into the triple digits during the season. While summer is still an option, spring and fall are your best bets for a comfortable experience when camping in Utah.

Note that from July to September is monsoon season, so be extra careful if planning a trip for mid to late summer. Always check the weather forecast.

What Are the Top Outdoor Activities in Utah?

What can’t you do here? There’s beautiful hiking in the summer and some of the country’s best skiing in the winter. Hiking and camping in Utah are a huge draw, but people also head here to backpack, bike, and do some Moab off-roading.

What Are the National Parks in Utah?

Utah is home to the famous Mighty Five. These five national parks are some of the best in the country, so you shouldn’t rush through them. Take your time and give each of them a few days. It’s a great excuse to go camping in Utah multiple times anyway!

We have the Colorado River to thank for some of the most spectacular scenery in southeastern Utah. The canyons in Canyonlands National Park are a maze of reds, oranges, and other incredible desertscape colors. Best of all, you’ll have fewer visitors to contend with as Canyonlands tends to see the lowest visitation numbers of Utah’s Mighty Five.

Routinely one of the best-known and most popular parks in the country, Zion is the park to see if you’re in Utah and short on time. While they’re all beautiful, Zion is the crown jewel of the highly competitive Mighty Five. This is one of the most competitive spots for camping in Utah, so get your reservation well in advance.

While you should absolutely hike the Narrows, be discerning about Angels Landing. It’s an incredible hike, but it should be reserved for experienced hikers as help can take time to reach you. If you don’t have that much hiking experience under your belt, come back after you’re a bit more seasoned and ready to properly enjoy the hike.

It’s clear that Zion is the most popular park in Utah, but it’s a bit less straightforward from there. While Bryce Canyon tends to be the second-most popular (Arches is a close third), it’s really hard to say. If you have the time, head to them all and see which you like best! Just make sure to get some photos of the hoodoos while you’re there.

Challenging Bryce Canyon for second place is the aptly-named Arches National Park. With more than 2,000 arches in the park, it feels like you’ve left Utah and ended up in another world. The rock formations here are something everyone should see at least once, so bring your camera and plenty of free time.

If you see one thing at Capitol Reef National Park, make it the Waterpocket Fold. This unique geological formation holds beautiful layers of sandstone and is one of the most incredible sights in the Desert Southwest.

There’s only one campground here with 71 sites, so get your reservation early. If you can’t get a site, don’t worry. With almost half the state run by the Bureau of Land Management, free camping in Utah is abundant.

What Are Some of the Most Popular State Parks in Utah?

As the name suggests, you will actually find antelope that still live in this park. Antelope Island State Park is home to many large animal species besides the antelope as well, including bison and bighorn sheep. This popular park is one of the best options for group-camping in Utah, though standard sites are also plentiful.

Visitors to St. George, Utah, should make a day trip (at least) to Sand Hollow State Park. This beautiful park boasts sandy beaches and a hefty amount of popularity. You’ll have plenty of opportunities to make friends, but you’ll have to go in the off-season if you want more space to yourself. If you go during peak season, the Sand Hollow Reservoir that the park surrounds is also a fantastic summer day trip.

Highly-recommended Moab has enough going for it already, but here’s yet one more reason to visit. While not a particularly appealing name, Dead Horse Point is one of the most picturesque spots in Moab. The beauty doesn’t stop when the sun goes down, either. Recognized as an International Dark Sky Park, you’ll get some of the best stargazing in all of Utah here.

Though the name might suggest it, Snow Canyon State Park actually receives very little snow. Named for a pair of early Utah leaders, Lorenzo and Erastus Snow, this park is featured in several famous Western movies. It’s easy to imagine why once you visit; the imposing canyon walls echo with the history of years past.

What Are the Top Attractions in Utah?

Even if you aren’t an avid off-roader, Moab is worth the visit. With plenty of tour companies, it’s easy to get off road, even if you didn’t bring your own rig. If you do have a 4x4, you already had this place on your list, and no further convincing is required.

The salt flats here are already ecological marvels and worth the stop. However, if the name Bonneville rings a bell, it’s likely due to its racing pedigree. While the entire flats area is beautiful and worth visiting, a section of the salt flats is reserved for high-level racing, which all racing enthusiasts should check out.

This small park features a dozen sculptures as well as 70 engraved pieces of stone in a section of Salt Lake City. If you’re already in Salt Lake City, the Gilgal Sculpture Garden is worth adding to the list as a relaxing afternoon walk.

Utah’s Natural History Museum features exhibits that tell the story of Utah and its section of the Mountain West, from ancient environments to the more recent First People’s exhibits. This museum can be appreciated as a day trip, but if you’re short on time, you can see the highlights in just a couple of hours.

Where’s Some of the Best Food in Utah?

Riverhorse on Main features food as good as the skiing in Park City. That’s to say, it’s high-level fine dining. Riverhorse is an experience all its own and will be appreciated by anyone looking for the highest-level menu in the area.

Who says you shouldn’t order sushi in the desert? Most people, and they’re usually right. Not here, though! Sabaku is a fun Southwestern take on sushi that caters to all sorts of dietary needs, making it easy to take the whole group out.

There’s a pair of Red Iguana spots, but you want to stop at the original. Yes, Red Iguana 2 is also great, but the original always has a little extra flair. This buzzy family-owned Mexican spot is a perfect stop for lunch or dinner, even if you’re just passing through.

This isn’t just any pizza joint. Mozz doesn’t add “artisan” to the name for flair. It really backs it up! Ingredients here are locally sourced from nearby farmers, and you taste the quality. Even if you’re just in Provo for the day, you need to make a stop at Mozz.

Utah is one of the best states for all things outdoors, and the happiness rankings of its citizens routinely reflect that. Even if you aren’t packing up and moving to the Beehive State, camping in Utah allows you to experience the adventure and excitement of the Desert Southwest.