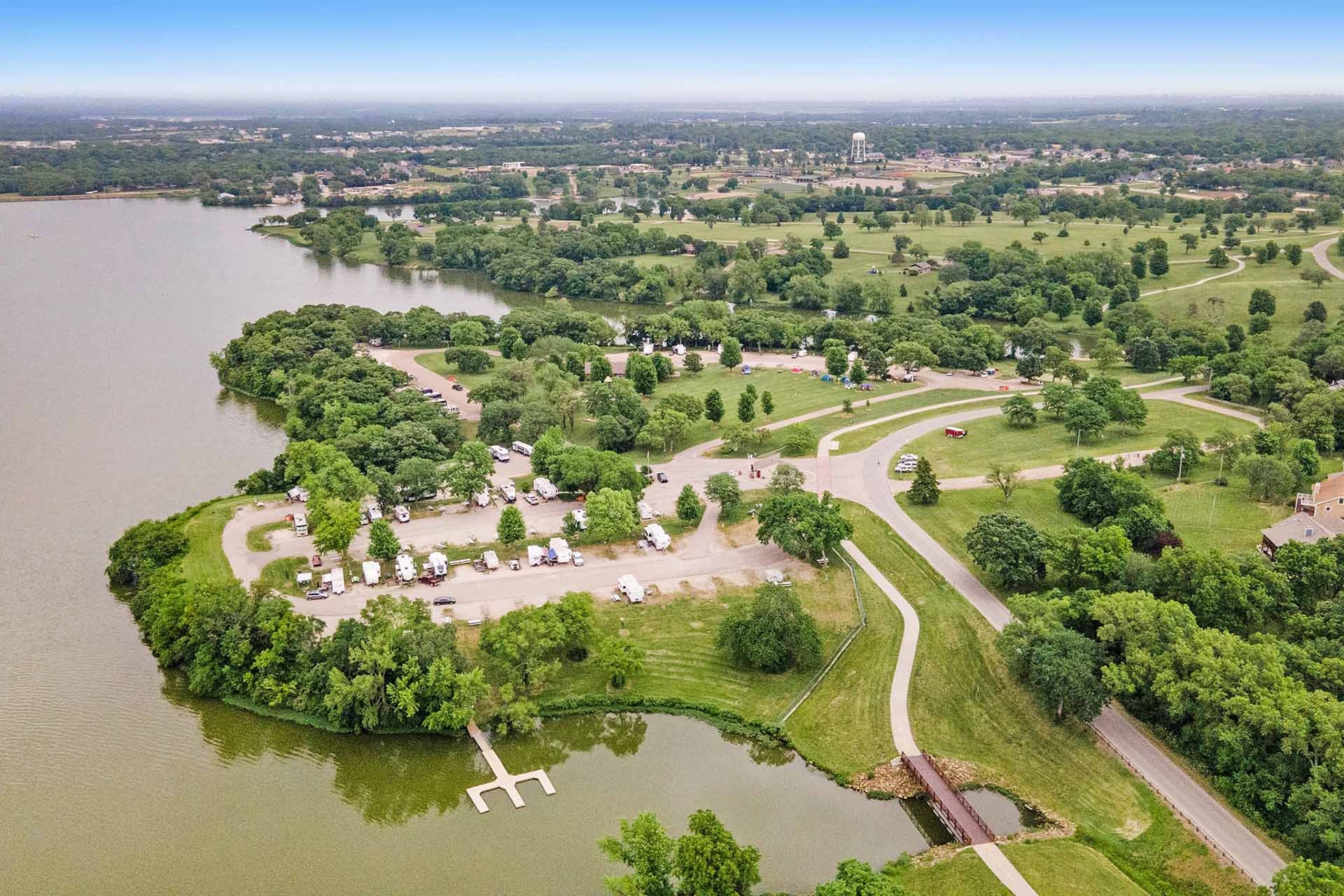 The Best Camping in Kansas

Head out for camping in Kansas to meander the many trails or explore Kansas highlights like Deep Creek waterfall and Rock City. Observe wildlife like elk and bison, try your hand at fishing, or simply sit back and enjoy the fresh air on your Kansas camping trip.

Camping in Kansas—yes, it can be done. Sure, it doesn’t top lists of outdoor destinations, but Kansas does hold most of the remaining U.S. tallgrass and prairie land. Camping in Kansas is actually much more varied than casual observers are led to believe, with acres of prairies and forests in which to pitch a tent or park an RV.

What’s the Best Time of Year to Go Camping in Kansas?

While you won’t be as concerned with crowds when camping in Kansas, you do want to be cognizant of the weather. Winters can be tough here, and summer temperatures get up there as well. Most travelers will want to visit Kansas from mid-late summer to the middle of fall.

What Are the Top Outdoor Activities in Kansas?

While kayakers might not have Kansas on their bucket lists, hikers, climbers, and mountain bikers should all make a stop in the Sunflower State. You can enjoy hiking in any of the National Park Service, National Forest Service, and Fish and Wildlife spots. Climbers will want to check out Rock City, and mountain bikers will have more than their share of trails to choose from.

What Are the National Parks in Kansas?

Kansas isn’t home to any national parks, though it held a national forest in the early 20th century. Camping in Kansas is a bit sparser than in other states but still available throughout.

Most of the remaining tallgrass that once covered a significant portion of the U.S. is in Southern Kansas. Tallgrass Prairie National Preserve exists to protect the ecology of the area and offer travelers a glimpse into the area’s history. This rugged area offers miles of hiking trails and great nature viewing.

This is the perfect destination for camping in Kansas for travelers coming from Colorado. Located in the southeast part of the state near the Colorado-Kansas border, this national grassland offers several developed campsites. Those looking for free camping in Kansas will find the Cimarron National Grassland (and surrounding Pike-San Isabel National Forest) allows dispersed camping.

Run by the Fish and Wildlife Service, the Kirwin National Wildlife Refuge protects several species of migratory birds, including waterfowl, shorebirds, and raptors. This is going to be a day-trip stop for most travelers, but if you want to spend an extended period of time here, there are plenty of hiking and fishing opportunities.

What Are Some of the Most Popular State Parks in Kansas?

While many travelers haven’t heard of Lake Scott State Park, it’s truly a hidden gem. At just over 1,000 acres, this park has plenty to offer, though the lake is the most popular destination. This is the perfect place to learn about Kansas’ history, as Lake Scott State Park is full of archaeological significance.

Nestled next to the Cedar Bluff Reservoir, Cedar Bluff State Park is actually split into two sections. The north section, the Bluffton Area, is the more popular of the two and also the more developed. This is one of the best spots for primitive camping in Kansas, with 243 primitive sites available on a first-come, first-served basis.

Named for the former president, Eisenhower State Park preserves 1,000 acres of tallgrass prairie and more than 400 acres of woodlands. Accommodations here are a bit more traditional for those looking for camping in Kansas with water and electric hookups.

What Are the Top Attractions in Kansas?

You might not see Kansas and think of space exploration, but Hutchinson, Kansas, holds one of the most interesting collections of space exploration artifacts in the country. In the mid to late 20th century, the Smithsonian downsized its space collection, and Hutchinson ended up as the beneficiary of these artifacts. Now, the Cosmosphere is a can’t-miss attraction for those passing through.

You won’t find Basquiat here, but what you will find is a quirky collection of local art. The Grassroots Art Center is dedicated to showcasing the work of amateur, self-taught artists. This nonprofit center features art and oddities from artists throughout the state, oftentimes created with household items.

Don’t worry, Toto, you’re still in Kansas. The Oz Museum, as you’ve probably guessed, is a museum dedicated to all things L. Frank Baum and “The Wizard of Oz” as a whole. There’s really no piece of media more tied to Kansas than “The Wizard of Oz,” and this museum in Wamego is worth an afternoon of your time.

Just 13 miles of Route 66 pass through Kansas, but they’re a whole lot of fun! Fans of the “Cars” franchise will love the life-size Hudson Hornet as well as Tow Tater, the muse for fan favorite Mater.

Where’s Some of the Best Food in Kansas?

There’s probably no cooking style more popular in Kansas City than barbeque. No matter your feelings on the best style of barbeque (or the proper spelling of the word), Joe’s is a world-famous rib shack that you have to try. Originally a gas station, Joe’s has been modernized to be a top-tier barbeque joint and tourist attraction.

There’s no better way to describe this spot than “cozy.” This small-time burger spot has earned popularity well beyond its size. You’ll find a classic burger without a lot of fuss, but when it’s done well, you don’t need anything else. Plus, 2022 is the centennial anniversary, so it’s really a historic landmark at this point.

Like the name suggests, the restaurant is train-themed. We’re not talking a few decorations, though. We’re talking your burgers come to you on a train that runs throughout the restaurant. The restaurant has been running the same way since 1954, so clearly they’re onto something. If nothing else, what other place brings you your burger on an overhead train?

Yes, Hays House has been around since 1857. At the time, the town of Council Grove was growing as travelers and traders came through. The original owners made Hays House into a restaurant, trading post, and theater. They even used part of it as a post office and courtroom at one point! Now, it’s just a cozy restaurant, but would you really want court being held during your lunch anyway?

The Great Plains states have a rich part of American history still on display, but that’s not all they’ve got to recommend them by. With wide open prairies and plenty of trails, hiking and camping in Kansas are perfect for those looking to spend some solitary time in nature.