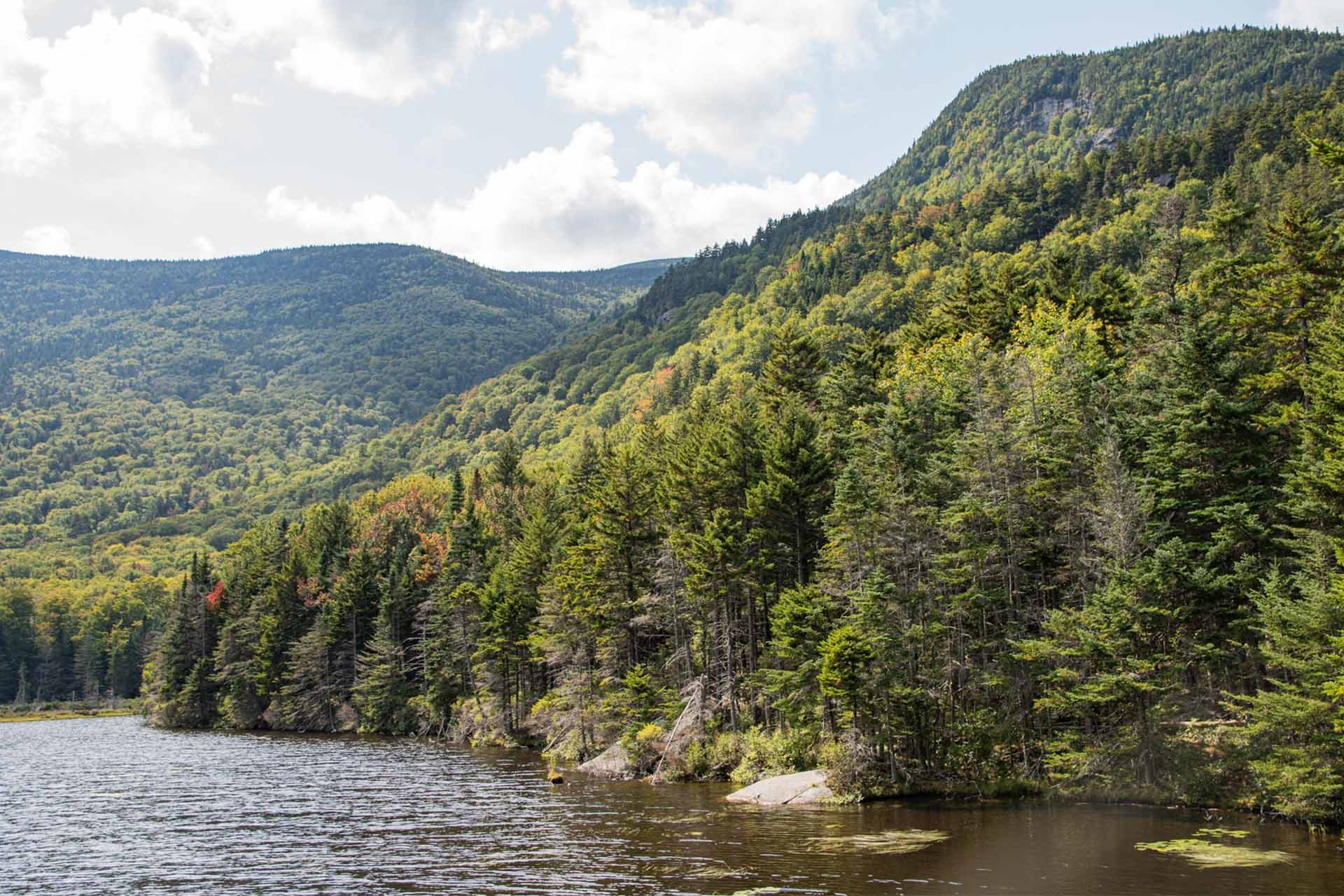 The Best Camping in New Hampshire

Whether you prefer a lazy day at the lake or a winding hike on a well-maintained trail, camping in New Hampshire is for you! Explore this list of New Hampshire campgrounds to begin plotting out your next getaway.

Lovers of unique and beautiful water features will be stunned by the natural wonders throughout New Hampshire. Sculptured Rocks Natural Area, Lake Umbagog, and Thompson Falls are only a few of the many breathtaking water attractions in the Granite State. At the same time, hikers camping in New Hampshire can enjoy the magical views from the White Mountains.

While it’s the fifth-smallest state in the U.S., New Hampshire punches out of its weight class in terms of outdoor activity. Hiking and camping in New Hampshire are mainly centered around its state parks and the Appalachian Trail, which brings a steady stream of hikers through the state in peak season.

What’s the Best Time of Year to Go Camping in New Hampshire?

Camping in New Hampshire tends to become most comfortable starting in the mid-spring and until early summer. The peak of summer sees a higher level of humidity, though the thermometer rarely ticks above 90 degrees.

If you aren’t here from roughly April to June, fall is another great time to go camping in New Hampshire. The Granite State, like its other New England counterparts, treats visitors to a beautiful show during the fall.

What Are the Top Outdoor Activities for New Hampshire?

Hiking and camping in New Hampshire are some of the most popular activities any time the weather is good, though not the only options. Getting out onto lakes or the bay is the preferred way to cool off if you’re around for New Hampshire’s summers. If winter sports are more your speed, you’ll find plenty of great skiing and snowboarding when the temperatures drop.

What Are the National Parks in New Hampshire?

While there are ample opportunities for camping in New Hampshire state parks, there are fewer national parks and forests here. New Hampshire only has two National Park Service (NPS) sites and one national forest.

New Hampshire doesn’t have any true national parks, though this is probably the closest to it of its two NPS sites. Saint-Gaudens National Historic Park preserves the life and works of Augustus Saint-Gaudens, widely considered one of the best sculptors in the history of this country. While it’s not an option for camping in New Hampshire, there are several great recreational trails here to enjoy.

The famed Appalachian Trail (AT) has 161 miles of trekking in New Hampshire. Unfortunately (or fortunately, depending on your perspective), these 161 miles are some of the toughest on the entire trail. If you want to test out your hiking skills, this is the place to see what you’re made of. That being said, there are some more approachable day hikes on the AT here, like Wachipauka Pond or Holt’s Ledge.

This is the only national forest in the state of New Hampshire, though some parts of it also cross into Maine. While there aren’t abundant options for free camping in New Hampshire, White Mountain National Forest easily holds the best ones. Of course, there are plenty of established campgrounds for campers looking for more amenities.

What Are Some of the Most Popular State Parks in New Hampshire?

Easily one of the coolest spots in the Granite State, Franconia Notch State Park is loved by locals and visitors alike. While there are several popular activities here, the two biggest ones you should see are the Flume Gorge and the Cannon Mountain aerial tramway. Both hold incredible views from two excitingly different perspectives.

If you want to pick a crowd favorite from this list, it has to be Hampton Beach State Park. While there are several great state parks here, Hampton Beach is far and away the favorite. This ocean-front state park offers a variety of activities year-round, with miles of beachfront to enjoy. Visitors can choose to swim, fish, camp, or just enjoy a stroll along the beach.

In the middle of the White Mountain National Forest hides Mt. Washington State Park. While it might seem odd to drive through a national forest to get to a state park, these 60 acres hold some of the best views in the state. At almost 6,300 feet at the summit, you can see several surrounding states and even into Quebec.

Crawford Notch State Park expands over nearly 6,000 acres of wilderness in the northern half of the state. If you’re looking for rugged camping in New Hampshire but still want a few creature comforts, Crawford Notch’s Dry River Campground is a good compromise. Stay at this small campground and get up early to enjoy great hiking and wildlife viewing as the sun rises!

Monadnock State Park offers a unique challenge in that you really need a reservation to get in. This small park is a hot spot for hikers and tends to fill up quickly during the peak season. The ratio of parking spots to eager hikers doesn’t add up in your favor if you show up late or don’t get a reservation on good weather days. Though, when you’re at the peak of Mount Monadnock itself, you’ll realize it’ll all have been worth it.

What Are the Top Attractions in New Hampshire?

This is one of the most unique amusement parks in the state and the self-proclaimed “best children’s theme park in New Hampshire.” Storyland offers a fun mix of amusement park rides, theme park attractions, and even a working train and aquarium for the kids.

Showcasing European and American paintings, this Manchester, New Hampshire museum has been around since 1929. You can enjoy one of their educational programs, see any of the displays currently in-house, or even join in on an interactive art class.

With 464 skiable acres, Bretton Woods is the largest ski resort in the state. Winter camping in New Hampshire isn’t exactly the most enticing prospect for most people, so New Hampshirites and visitors tend to hit the slopes when the snow falls. Ranking towards the top of all ski resorts on the Eastern Seaboard, this is the perfect getaway for beginners and experts alike.

It’s exactly what it sounds like, and it’s incredible. This working railroad takes you on beautiful scenic tours of up to about 50 miles long (and up to roughly 5.5 hours). If you’re up here during the Christmas season, the kids will love Santa’s Holiday Express. If you have time to spare though, the Mountaineer trip is the best option of them all.

Where’s Some of the Best Food in New Hampshire?

This is the perfect place to get something to eat after you tour the Currier Museum of Art. A farm-to-table-style Mediterranean restaurant, this hot spot in the heart of downtown is worth a trip even if you aren’t seeing the museum. Everything here is locally sourced and in season, meaning you’ll get the highest-quality ingredients available anytime.

It feels like nothing expresses the spirit of New Hampshire quite like the Carriage House. Its classic American cuisine has been re-imagined with an upscale flair, all without feeling haughty. It’s everything you’d want if you melded the history of New Hampshire with the culinary availability of the modern day.

Row 34 is a small regional chain with four total locations throughout New England. It does casual New England-style clams and seafood as well as the best of them, so you can’t go wrong. If you’re not a seafood lover, there are a handful of non-fish options to go with a long list of craft beers.

What used to be a farmhouse is now one of the area’s most exciting New American spots. While it is a cider company with a great drink menu, there’s also a full restaurant serving classic entrees if you want something more substantial.

The Granite State is often seen as a ski destination and even a food and cultural spot. However, beyond all that, some great camping in New Hampshire lies below the surface. If you know what you’re looking for, you’re sure to make memories of places many others will never go.