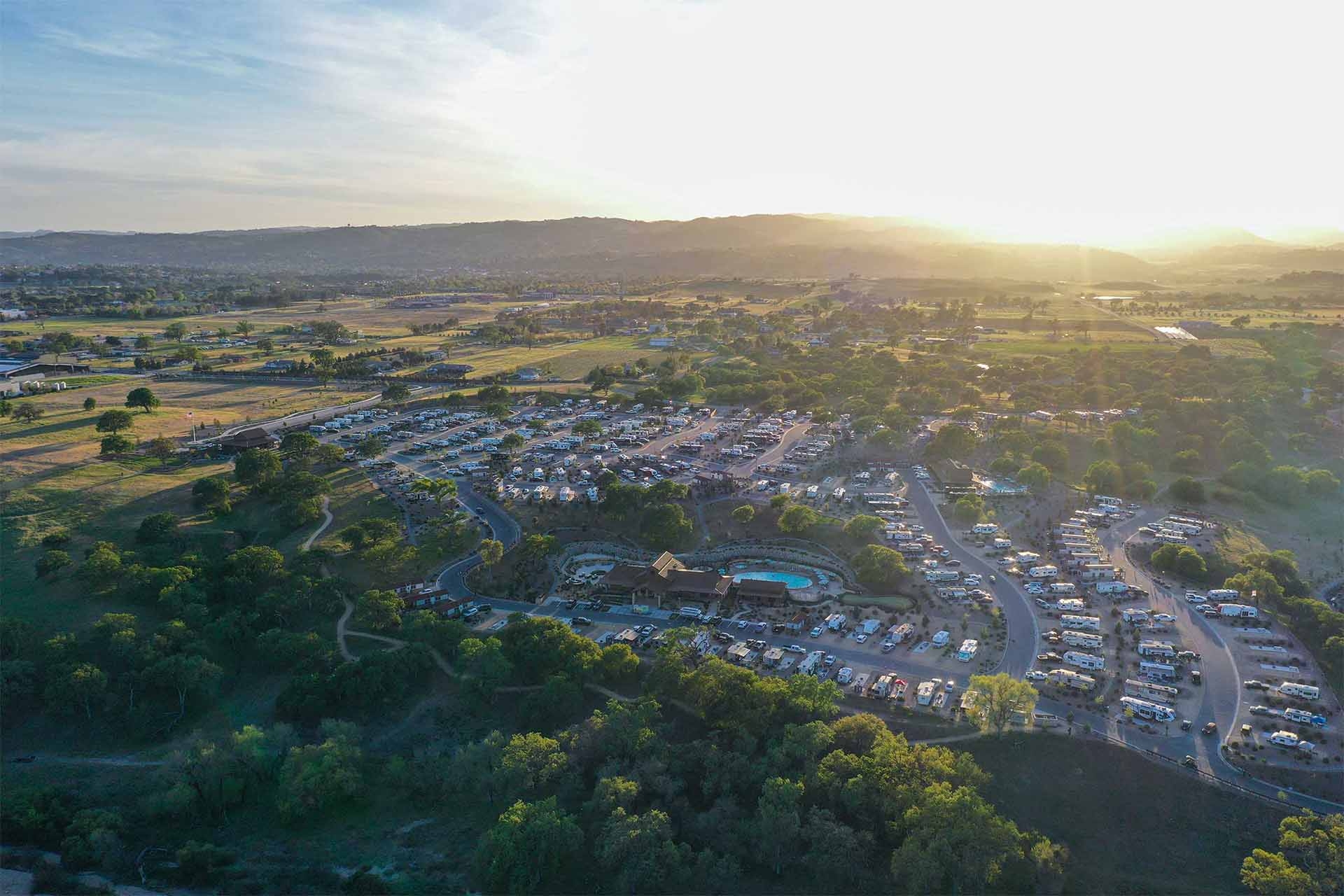 The Best Camping in California

Sit back by the sea, soak up the desert sun, or stand in awe of towering trees when you go camping in California. Whether you’re yearning for a waterfront view or you’re looking to get lost among the Redwoods, California campgrounds offer something for every taste!

Camping in California remains a crowd favorite. From the Pacific coast, through the desert, to the snowy Sierras, California gives campers and outdoor enthusiasts plenty to explore. The state boasts nine national parks and is home to one of the diverse state parks systems in the United States. California's campgrounds reflect its wide range of climates, environments, and cultures, with thousands of campsites available in federal or private campgrounds. However, with the rise of outdoor recreation and camping, California's state and national park campgrounds have experienced sold-out seasons, and its many private campgrounds have been busier than ever. Because of its demand, campers should book their trip well in advance to score their desired campsites and activities. Depending on the area, outdoor activities in California can include rock climbing, hiking, mountain biking, kayaking, surfing, off-roading, and more. So lean into the dream and check off that bucket-list trip by camping in California!

Camping in California: Ways to Stay

FAQ about Camping in California

When is the best time to camp in California?

The best time to camp in California comes down to the area in which you're camping:

If you're looking to go camping in the Sierra Nevada, visit Lassen Volcanic National Park, or Mount Shasta, snow buries the high country during the winter. Wait until the summer to go camping here. Although high elevation, the Sierras still get very hot during the summer months, and shade coverage might have changed with new burn areas. Be prepared with extra water (one liter of water per person, per hour) and sun protection, and avoid going out in hot temperatures.

What are the best places to visit in California?

Some of the best places to visit California are:

What National Parks are there in California?

There are nine National Parks in California:

Located in California's central Sierra Nevada, Yosemite's granite peaks, sequoia groves, sky-high waterfalls, pristine lakes, and diverse ecosystems attract millions of visitors from across the globe each year. Within the park, the most popular attractions include Glacier Point, Half Dome, Tunnel View Point, Mariposa Grove, and Bridalveil Fall. Some of the most common outdoor activities in the park are hiking, rock climbing, wildlife viewing, and general sightseeing. So when should you visit Yosemite National Park? Its peak season is from April to October. However, if you're looking for a place to go for winter activities such as snowshoeing or cross-country skiing, this high-elevation destination will be covered in lush, white snow.

Located just a short drive from Los Angeles, Joshua Tree National Park is perfect for those looking to experience the beauty of the desert. Positioned where the Mojave and Sonoran deserts collide, Joshua Tree National Park is home to various plants and animals such as the kangaroo rat, greater roadrunner, and desert tortoises. A popular destination for rock climbers and boulders, other activities within the park include hiking, wildlife viewing, birding, and stargazing. Due to the extreme heat in the summer, the best time to visit Joshua Tree National park is between October and May. Arrive at the park early as it gets busy by late morning.

Along the border of California and Nevada is Death Valley National Park, the largest national park in the lower 48. The park continues to break records as the hottest, driest, and lowest national park. At 282 feet below sea level, Death Valley's Badwater Basin is the second-lowest point in the Western Hemisphere and open to visitors to walk on. Other popular attractions within the park include Artists Drive, Telescope Peak, Dante's View, Mesquite Flat Sand Dunes, and Zabriskie Point. What to do in Death Valley's National Park? Hiking, nature photography, and wildflower viewing in the spring are the outdoor activities visitors partake in when in the national park. Because of its record-breaking heat during the summer months, guests should visit the park during the fall, winter, and spring.

The best time to visit Sequoia & Kings Canyon National Park is spring, summer, and fall. However, a heads up-- rain showers might mean snow in the higher elevation areas of the park, so be prepared and pack accordingly.

Along the coast of Northern California, you'll find the different state and national parks that make up the Redwood National and State Parks. These parks protect 45% of all remaining coast redwood old-growth forests. You'll quickly understand the importance of conservation efforts when visiting, as seeing the park is an almost magical experience. The temperate rainforests of the area are unlike any other forests in the nation. Visitors can partake in a variety of outdoor activities within the park, including but not limited to hiking, biking, wildlife viewing, and enjoying scenic drives. Popular attractions within the park are Enderts Beach, Trillium Falls Trail, Howland Hill Road, and Tall Tree Grove. So what's the best time to visit the Redwood National and State Parks? Because of its mild climate, you can go to the parks year-round! Sure, it gets a bit cooler in the winter months and warmer in the summer, but the area's weather is usually pretty consistent.

Also in Northern California is Lassen Volcanic National Park. Lassen Peak, the largest plug dome volcano in the world, last erupted in 1917! Although loaded with various hydrothermal sites, volcanoes, and mud pots, the climate is relatively cool even in the early summer months due to its northern location and high elevation. Popular areas within the park are Little Hot Springs Valley, Devils Kitchen, Boiling Springs Lake, Bumpass Hell, and Sulphur Works. What is the best time of year to visit Lassen Volcanic National Park? The time window is quite short, with roads throughout the park opening in July and snow beginning to fall in October.

Pinnacles National Park: California's newest and smallest park of nine, Pinnacles National Park, is located in Central California. Eroded leftovers of an extinct volcano, the famed pinnacles of the park are domed rock formations that visitors can summit to overlook the surrounding valleys. Note that the high peak area splits into east and west regions. Alternatively, park-goers can also explore talus caves, narrow canyons filled with boulders, such as the Balconies Caves and Bear Gulch Cave. Pinnacles National Park is where you can see a California Condor, the largest bird in North America. Other activities you can do in Pinnacles National Park include viewing wildflowers, swimming in the park's public pool (yes, you read that right), and hiring a guide to rock climb the pinnacles. When is the best time to visit Pinnacles National Park? During the summer months, the temperatures soar dangerously. Visitors should go during the spring, winter, and fall months and consume at least one liter of water per hour while outside.

What Are Some of the Most Popular State Parks in California?

The first state park in the U.S. was actually established in California in the mid-19th century. Some of the state parks in California could likely be national parks in other states, but with nine already here, you end up with a rich state park system instead! There are 280 parks total, so it’d take you a while if you ever decided to try visiting them all—but it’s highly likely worth the try.

This one is actually a cooperation between California and the National Park Service. Redwood State and National Parks are in the same area and jointly managed. If you’re already at Redwood National Park, hop on over to the state park side and see what it has to offer!

Who says Los Angeles is a concrete jungle? The nearby Santa Monica Mountains hold one of the more popular state parks in California. It’s a popular day hiking area for locals and visitors alike, but it definitely is worth at least an overnight.

You’ll have picturesque views of the water and the mountains at Emerald Bay. Located near beautiful Lake Tahoe, few places give you a greater swatch of camping in California. Whether you want to head to the waterfront or venture into the mountains, you’ll find yourself among some of the most beautiful features in the state.

What Are the Top Attractions in California?

California is such a large, diverse state that there’s something for everyone. While often associated with Hollywood and the Southern California lifestyle, the top attractions in California are quite varied.

Just because it’s not the only thing doesn’t mean it isn’t up there! The Hollywood Walk of Fame, Hollywood sign hike, and the TCL Chinese Theater are all must-sees if you’re traveling through Hollywood, California.

Sure, there’s no Epcot ball, but this West Coast Disney stop is nothing to ignore. This top attraction in California is sure to be a hit if you’re traveling with kids. While tickets aren’t cheap, you can save some money with a single park ticket or by bundling a hotel stay with your park ticket.

While the famous Golden Gate Bridge might bring you north, unless you’re a real architecture enthusiast, you likely aren’t going to San Francisco just to see the bridge and leave. Luckily, San Francisco is steeped in California history and is at the forefront of the state’s culture and attractions.

If you’re already there, make sure to add Alcatraz, Lombard Street, and Fisherman’s Wharf to your itinerary.

This is easily one of the most recognizable sights in all of Los Angeles. While featured in countless movies, it’s much more than just its exterior. Inside, you’ll have an opportunity to learn about the world around you. Once you’ve checked out the interactive exhibits, the park itself is a great place to walk around or have a picnic lunch.

Are campfires allowed in California?

Campfire restrictions change depending on the threat of wildfires in the area. Fire restrictions fall within the area's jurisdiction, such as the Bureau of Land Management, National Forest, National Park Service, or county ordinances. If you're camping during the summer or fall, there will most likely be a ban on any open flame as this is when California is most vulnerable to wildlife. Note that this might include a ban on barbecues and charcoal grills. Before your camping trip, check in with the campground's rangers or management to whether campfires are allowed at campsites.

Are there bears in California? Are they dangerous?

Black bears are the only wild bears in California, yet they come in a range of colors, from lighter browns to black. This might confuse people, leading them falsely to identify a black bear as a grizzly. Bears in California are more common in the state's northern, eastern, and western areas, not the south. Black bears tend to only be dangerous in defensive situations where a person is too close, a circumstance easy to avoid. According to the California Department of Fish & Wildlife, these tips on bear safety should prevent any dangerous situations with bears in California:

When camping and hiking:

When confronted by a bear:

When attacked by a bear: Your best bet when a bear threatens is to fight back. Throw rocks and hit the bear with whatever you can find, like branches or, if you're at your campsite or near your car, whatever heavy gear is nearby.

Looking for More? Check These Reads Out Next